Parrot, long term conservation is needed to preserve the race!

The Bahama’s Amazon is a subspecies of the Cuban Amazon. They have dark green feathers, a white crown and upper cheeks, rose red throat, red shoulders and outer wing feathers tinged blue. Their legs are pink.

The Bahama’s Amazon once lived in Abaco, New Providence, San Salvador, Long Island, Crooked Island, Acklins and Great Inagua. Records of the Bahama Parrot exist as early as 1492 when Christopher Columbus landed in the New World and noted them in his dairy. Today, these parrots are rare and exist only in Abaco and Great Inagua. This decline in the population is due to habitat loss, hunting and capture to make pets. Today, the Bahama’s Parrot is protected. New research suggests that Bahama’s Parrots in Abaco and Inagua are distinct populations. Further studies may warrant an official name change. The parrots in Abaco are commonly called Abaco Parrots.

In 1994, the Bahamian Government set aside 20,500 acres in south Abaco called the Abaco National Park to help preserve the Abaco Parrot population. Long-term conservation and management is needed to preserve the race. An extensive study done in the early 1990’s by Rosemarie Gnam offered a multi-faceted approach to address the threats to the parrots as well as implementing their recovery. Since Ms. Gnam’s study, there have been a series of three Bahama’s Parrot studies called Status in the Wild by Caroline Stahala and other scientists from the U.S. Fish & Wildlife Department and the U.S. Geological Survey and the University of North Carolina. The Parrots and People Project was also conducted by Susan Jacobson, professor of Environmental Education at the University of Florida in partnership with the Bahamas National Trust. Each of these studies have concluded the same thing – Long term conservation is needed to preserve the race! 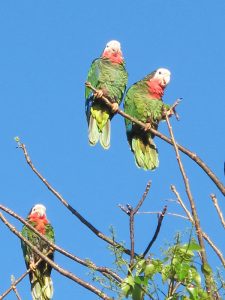 The Bahama Amazon Parrot is found in the Abaco pine and broadleaf forest of the southern part of Great Abaco. The Abaco population of The Bahama parrot is the only new world parrot that nests in sub-terrain rock cavities. Many of these nests have internal ledges or rocky overhangs to protect the eggs within. It is believed that this adaptation to ground nesting is due to the few holes found in Abaco’s trees.

A clutch of 2-4 eggs are laid in late May or early June. Eggs hatch asynchronously 26-28 days after the female begins incubation. There is about a 46% failure hatch rate due to increasing nest predation by feral (wild) cats who will injure or kill the females. The eggs and the chicks are sometimes eaten by large land crabs, snakes and feral raccoons or the nests are flooded due to heavy summer rains.

Staples to the parrot’s diet are seeds extracted from unripe cones of the Caribbean (Abaco) Pine and the fruits of poison wood, pigeon berry, wild guava and gumbo limbo.